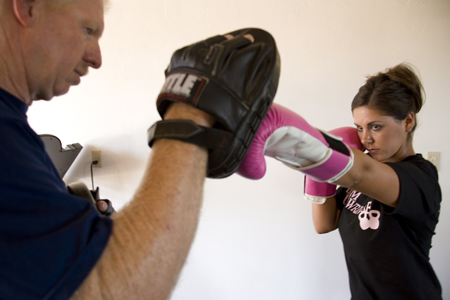 Most people don’t ask me this question outright, but I know they are thinking it: Does self-defense really work?

That’s like asking the Sham-Wow guy if his towel really holds 12 times its weight in liquid, right? Hey, I welcome the believers and doubters alike, and I have more to offer you than my belief in the
effectiveness of self-protection measures. But first, let’s figure out
why it’s so hard to believe a woman can fight back and win.

I believe that doubt over the effectiveness of self-defense comes from a few places. First, many women feel insecure about their ability to fight back, simply because they have never received any training.
This is why we need to make self-defense training more available to all
women, and introduce it earlier in life. Second, bad advice like
“fighting back will only make him mad” seems to permeate trickle-down
wisdom through generations. This advice is not only inaccurate, but also
dangerous.

The NIJ (National Institute of Justice) commissioned a study in 2005 called The Impact of Victim Self Protection on Rape Completion and Injury, authored by Gary Kleck and Jongyeon Tark. Click here to read the entire 77 page study, or
just read the highlights below.

Kinda makes you re-think just how dangerous you can be with even simple self-protection measures! If you’ve been putting off learning self-defense, don’t delay any longer.to read about some of my favorite
self-defense programs who offer classes in cities across the USA.

32-year-old Erin Weed is a professional speaker, author, violence prevention expert. Her calling to the field of violence prevention and self-defense began in 2001 as a direct response to the murder of her
friend and sorority sister, Shannon McNamara. After Shannon’s death, Erin
abandoned her career in TV production to study with the best
anti-violence activists, personal safety specialists and self-defense
experts in the world. In 2002, she began traveling the nation giving
keynotes and seminars in schools and businesses. To date, she has spoken
to half a million people with her uplifting and empowering message of
staying safe from violence and finding peace in the process.

About the Author:
MeLisa Turcott Strongheart is a Master Instructor and owner at Mercer Island Martial Arts. She is a 7th Dan Master Instructor. She also holds a Master’s Degree in Psychology, Mental Health Counseling. She brings these two areas of specialization to her work with families, children, teens, and in designing curriculum.

Master Strongheart emphasizes and has taught thousands of students the value and power of respect. Respect for oneself, others, and the community.

(MIMA), located on Mercer Island between Bellevue and Seattle in Washington is celebrating 24 years on the island in 2021. MIMA's curriculum is intentionally designed to build fitness, flexibility, self-defense, as well as to create a milieu that engenders physical and psychological growth, respect, courage, community activism and leadership.

MIMA has programs for families to practice side by side, as well as adult, teen, and children's classes. Also offers before and after school, and summer camp programs for kids.